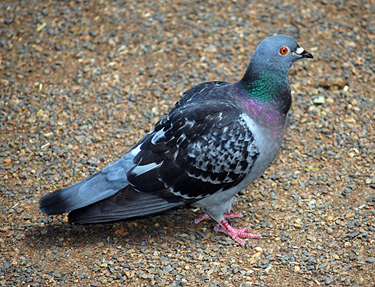 Feral pidgeons were introduced to Australia in the 1600’s and they are common in urban environments. They have not ventured far from human settlement, and can be found in large numbers in capital cities and larger towns, with the exception of Darwin.

Feral pigeons are descendants of domestic homing pigeons that were introduced to Australia from Europe. Feral pigeons can be grey, brown or white, but are usually grey in colour with two black bars across each wing and iridescent feathers around the neck.

Impact: Although feral pigeons are generally considered to be no more than a nuisance, they can cause a number of impacts. Pigeons potentially pose a risk to human health through transmission of diseases. They also increase the risk of disease and parasite transmission between feral, and seabird populations.

Pigeons attract ticks, mites, cockroaches and rats. They can also cause unpleasant noise and odour issues as well as providing a vector for the introduction of weeds. Pigeons and their droppings can cause damage to the buildings or monuments they reside, perch or nest in or on.